Last week, I discovered that in addition to being an attack bird, the pheasant is also a stalker. A very angry unsubtle one, at that. While minding my business in the barn, he started peeking around the door. I thought, “no problem” since he did that when we were friends, too. And then he started rushing me…Fast and furious, he came, wings flapping, projectile beak jabbing. Aided by buckets of water, I managed to keep him outside of the barn. But filling them takes time and once empty they were useless in guarding during outside chores. Time for a new strategy.

I picked up a broom and started a new dance with him. Using it as a barrier, he attempted to get around it at first and eventually gave in to attacking it. What a determined little guy! He followed me outside the entire time lunging at me every chance he got. Interestingly, he did not go after any of the animals. Cats sauntered by. Ponies lounged around. Alpacas didn’t even sniff at him when he hung out in their pen. But people? No, thank you, says the pheasant.

We went on a “walk” over to the alpacas and he snuck under the gate and went off into a corner. He didn’t even follow me back to the barn. He hunkered down so long that I had time to close up the barn and make a run for it without my broom. Obviously, the moment he noticed my departure, he tried to come after me. Luckily for me, he’d forgotten how to get back out. (Yes, seriously.) By the time he figured it out, I was safe behind the fence. Round two goes to me!

One of the buckets that doused him kinda knocked him backwards into a roll and he lost one of his tail feathers. You know, one of the ones that had been broken in half by a kid last week? I felt so bad. Even while he lunged at me!

The calm before the storm… 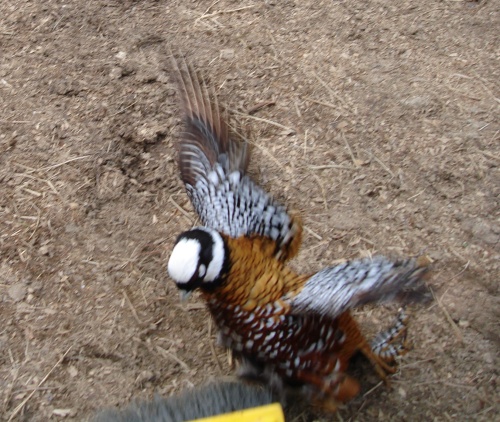 You thought I was exaggerating, right? Nope! 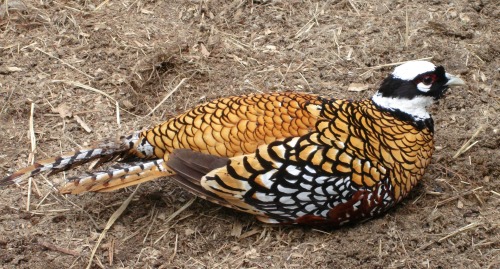 This is the part where he took a little nap due to exhaustion.

In all the melee, I forgot to close the barn doors before letting the alpacas out. Poor Athena! Last week, the sheep/goats stole her food, this week it was three big alpacas. When I got into the barn, she was pressed up against the wall, looking somewhat defeated. (If only I could give her hugs!) Fortunately, the alpacas are skittish around me still, unlike the pushy crew from last week. Another win for Athena!