When I see an animal, I have an overwhelming desire to smoosh my face against theirs. Horses, bearded dragons, birds, dogs, cats, unicorns. We’re taught at a young age not to do this because the animal might get spooked and react, understandably, violently. News flash, this is not a deterrent for me.

I want to get as close to them as possible. I’ll throw myself on the grass in front of a chipmunk whose made the mistake of popping its head out of the ground. So far, they all flee in terror but I’m not giving up. If it’s a dog, I’ll put my face right in theirs and go in for a snuggle.

When I met my aunt’s newest dog, I flopped right down in front of her and dispensed kisses and belly rubs immediately. My aunt’s response was, “You really get down on their level, don’t you?” Every time. If I’m looming over an animal, I feel like I’m intimidating them, when all I want is for them to love me. I want to make myself as small as possible to make them as comfortable as possible.

When I’m hanging out with Julian at Winslow, I’ll be on the cobblestones cuddling him. He’s eight inches tall, tops. I’m almost 5’7″ and tower over him. I want him to feel safe, so chicken poop be damned, “hello, ground.” He falls asleep in my arms almost on contact.

I was hand-feeding George the tortoise once and manipulated him into climbing on me. All 35 pounds or so, precariously balanced on my kneecap, as he tottered back and forth. Painful? Yes. Pure joy? Also, yes.

One time I brought mini donkeys Zorro and Bianca a few treats and sat down on the floor of their hut with my back up against the wall. They may be “mini,” but they’re wider and longer than I am tall. On the ground, they’re the looming ones.

Zorro decided to check for more food by biting and stepping on my extended legs. Repeatedly.

Bianca put her face right up next to my ear and stayed still. For minutes at a time. Her soft breath was audible as I gave her kisses on her snoot.

I was barely visible, surrounded by hundreds of pounds of donkey.

I left bruised and happy.

Get down on their level. Sure, it might hurt sometimes, but it’s worth it.

Many years ago, when it was just Pisca, Karolina, and Noelle (plus Star but he was from a different location and was kind of on the outskirts of their clique), I set out to socialize these beautiful creatures. They’d been living at an alpaca farm with many others and when the owner was no longer able to afford them, all of them needed new homes. These three came to Winslow to live out their days in peace.

They were very people-shy and uninterested in human touch. One of the ways that I try helping at Winslow is to socialize animals who’ve given up on people. I worked very hard with Athena, the sheep who lived on a median strip on 495, and by the end, I was able to lie down with her. I continue to work with Justice, a once-feral goat, who now eats a treat from my mouth. And I’ve focused a lot of energy on these beauties.

Before Pisca passed of old age (r.i.p. little lady), she was pretty comfortable eating grain out of a bowl that I was holding. Karolina became comfortable enough to eat grain right out of my hand. And Noelle would grab a bite from the bowl now and again.

Once Fern and Charlotte, and then Leia and Sundae, arrived at Winslow, there were a lot more personalities floating around and trying to hand feed seven alpacas became less of a focus for me. Until last week.

I was going about my chores, getting ready to feed the donkeys who were loudly exclaiming that it was taking too long. Gabriele, the llama, was lurking around the barn during this, which was a little rare. He usually goes to his little house, perched in the alpaca enclosure, without much protest. As I grabbed the donkey food and was setting out to feed them, Gabrielle put his nose right into the bowl and started eating it. I feed him a couple of fortune cookies each week as a little bonding ritual so hand-feeding him was normal but he’d never just shoved his nose into a bowl while I was clearly on my way to do things.

But Gabriele was like, “So? Mine now.” I gave in and let him munch, refilled the bowl, and went off with to the two cursing donkeys.

I came back and he was still there. It was clear that he wasn’t going to budge from his spot and I realized that it was because it was icy and he was not having any of it. Here I am on the other side trying to coax him to come over.

To be fair, it was pretty terrible out.

So, yes, I started bribing him.

I finally got him to trudge through the ice and continued feeding him from the bowl inside the enclosure. Good boys must be rewarded! This peaked Karolina’s interest and she started heading my way. Soon enough, she was eating out of the bowl while Gabriele was eating a handful out of my hand.

The rest of the alpacas watched curiously. “What is she doing?” they seemed to say. “She’s never done this before.” And they stood, stock-still, behind her contemplating this new arrangement. Noelle came forward to eat but Karolina kept squawking at her to back off. I kept encouraging Noelle to ignore her but her daughter won that round. She waited until Karolina was done and found all the leftovers on the ground.

Alpacas are wonderful, curious creatures. They have interesting quirks that I haven’t found in other animals. They blink differently, they argue with each other in amusing tones, and most fascinating to me, they scream at big dogs. I’d never heard anything like that the first time I heard it! I’ll see if I can dig up video.

Mostly, though, I’d like to get into a big snuggle pile with them. I’m not holding my breath that it’ll ever happen, but I’m definitely crossing my fingers!

Gone but not forgotten

Today there is a hole in my heart. Though it feels as big as a mountain, it must just be a tiny pinprick. 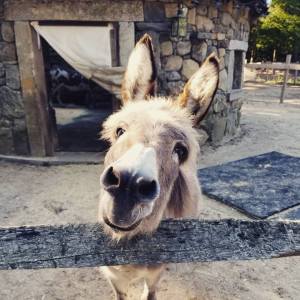 Many years ago, I was lucky enough to meet Scamp, Bella, and Zorro. I immediately took a liking to them all but especially Scamp. I didn’t realize that donkeys could smile or hug until I met her. I’ve spent almost every Sunday over these years spending a little time with her (there are lots of animals to see and tend to here), giving her treats, pets, and hugs. 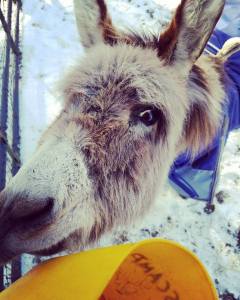 She was always separated at eating time because of her deteriorating teeth.In June of 2016, she wasn’t eating well, so I sat with her in her pen coaxing her to eat. I think that’s when we really started bonding. 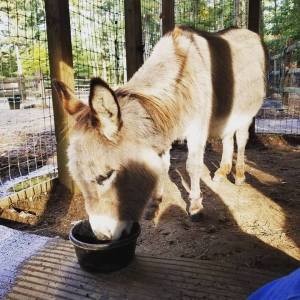 She started hugging me back at one point. She really leaned into them, like I do when I hug my loved ones. I’m not sure I can give it justice by trying to describe the feeling of elation hugging her gave me. 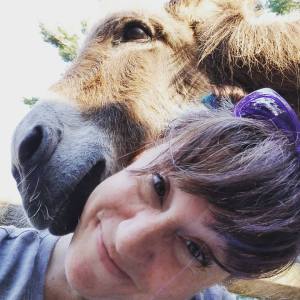 Over the summer, we played a concert at the farm and my favorite part, by far, was watching Scamp go through the crowd of friends and family and nuzzle them. “Treats? Anyone have treats? Ok, I’ll settle for a hug.” I definitely forgot the lyrics at least once while watching her. A few months back, I discovered that she liked having the inside of her furry ears scratched. She’d stop mid-bite and lean into it. She was magical to me.

Over the last few weeks, she stopped eating. For good. No matter how anyone tried to help her eat, she was done. She passed on Friday night.

Volunteering at an animal sanctuary is a delight as much as it is a challenge. These lucky animals get to live out their best lives under Debra’s, the staff’s, and volunteer’s care. But the price for those who dedicate their time and hearts is that the animals live here until they pass. Losing any animal hurts. Losing one who you feel utterly connected to is devastating. This lyric helps fit that place for me.

I was lucky that I was able to say goodbye to her, albeit through the sheet she was wrapped in. I got to touch her nose one last time and give her one last hug. My tears haven’t stopped flowing yet but they will and I’ll move on. But I’ll carry that tiny hole in my heart with me always.

Safe travels, Scamp. You are loved.

* If you are interested in learning more about Winslow Farm Animal Sanctuary, please visit http://www.winslowfarm.com. Visitors are welcome to comes and meet the animals and donations are always appreciated. Hope to see you there sometime. *

I can’t believe that my last post was in 2014. A lot has happened since then. I’m coming up on eight years at Winslow in a few weeks and I now have 6 cats and a dog. (I know, right?!) I plan on posting regularly again, for real this time. I also plan on diving into the experience of living with so many animals.

In the meantime, here are a few of my favorite recent photos. Enjoy!

Archer soaking up the sun with his best buddy, Roscoe, in the back.

Scamp showing off her beautiful smile.

Biff in a blanket. 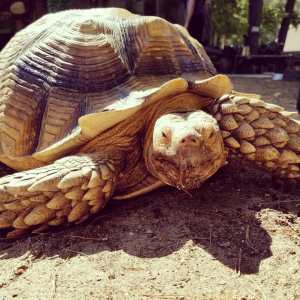 A smile from George.

Have a great week!