Words don’t even begin to cover it!

I am not sure that I can even explain how great it was being at the farm this week. I arrived and Deb asked me if I’d met the new addition. I just about fell over when I saw this little guy! He was so freaking CUTE!! All he did was eat hay – seriously. I visited him in the cat house twice. He spent the entire time face down stuffing himself – and try to avoid me petting his ears (unsuccessfully, I’d like to report). 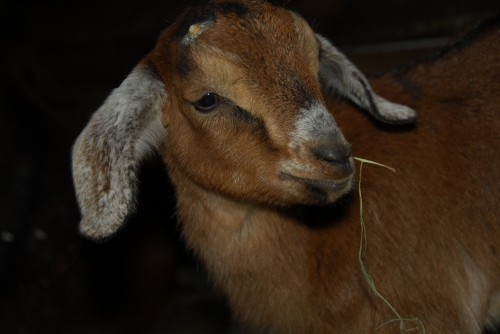 I tried leaving a bunch of times and even got the “where are you?” phone call from Matt, worried that I was stranded somewhere, but I just couldn’t get out the door. He checked my bags when I got home to make sure I didn’t have a stowaway. I didn’t even tell him about my plans to steal the goat! Ah, love.

After I tore myself away from the little man the first time (sooo hard! Did you SEE his tiny horns???), I continued on to the barn and spent time with my friends. I did a little grooming, a bunch of feeding, a lot of petting and spent time antagonizing the pheasant (for reporting’s sake! Usually, he just antagonizes ME!!).

Being around my feathered stalker is like participating in the most violent game of Simon Says ever. When I leave the barn, he walks parallel to me. If I run, he runs. But when I look at him, he freezes. Turn my back? Oh, that’s just “game on” right there (don’t forget you have to tag Simon. This is his favorite part). Swing around to face him? Freeze! Closer and closer he gets until he can safely go in for the attack. When caught, he backs off and starts all over again and the dance continues. He was a bit confused in this video because I turned the tables by following him around. I definitely recommend watching the whole thing though, it’s worth it!

I also brought my Nikon with me. My old rule of “no camera on working days” kind of went right out the window. I even went as far as balancing giant food bowls in one hand and the camera in the other in hopes of capturing everything I could. I’m starting a new trend here on Minding the Minis and will be posting more often. Get ready for Whimsical Wednesdays (where I’ll feature videos. I couldn’t think of a good video alliteration. Visual Vendsdays? Ohhh, vampires…) and Photo Fridays (obvious, but it works!)!!

It was a glorious day on the farm. The weather was even better than last week, there’s a new kid in town (HA!) and I spent time petting munchkins like this: