Monday on the farm was lovely. The temperature was a bit on the colder side but sunny enough that it made up for it and there weren’t any mosquitos. A few weeks ago, during that week of incredibly warm weather, the mosquitos were buzzing around and without bugspray, I ended up staying for a shorter period of time. Similarly, if it’s too cold, I tend to jet pretty quickly, as well.

This week, I lingered. When I arrived, Lunar and Spirit were hanging out with Stormy and Cloud in the upper pen. I really like when they’re up there already because it means that I get to spend a few minutes petting them instead of diving right into the feeding. In between head scratches, Lunar hauled off and chased the pheasant away as I cheered her on. If I were fast enough, I would have caught it on my camera. It’s an awesome sight watching this huge animal stomping after a small bird, who is actively fleeing in terror. I’d feel bad for him, except he continues to stalk and try to attack me. Get him, Lunar!!!

After my snugglefest with Gully…

I passed the girls. Indifferent as always! 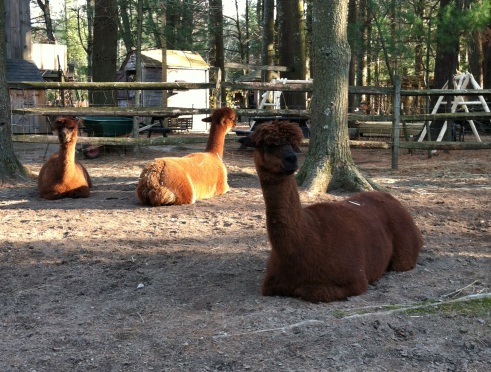 Watched these bunnies for a while. Pretty sure it’s a mating dance. So cute.

Then I heard this especially vocal duck. He sat there yelling at another duck across the way. I missed the part where he splashed his little feet in the puddle, but couldn’t resist posting his loud calls. (One of these days, I’m going to remember to film horizontally!)

Aaaaaand then he ran over. Watch carefully as his squat little body makes it all the way around. While the actual reunion was blocked, his journey makes the video worthwhile.

In the meantime, this goose was busy bathing.

I rounded off my visit with some doggy time. I love how focused she gets! “Throw it now, please,” said Pandy.