Dragonflies are all over the farm right now. Over the past few weeks, I’ve been lucky enough to have significant experiences with a couple of them. While many have been flying very close to me, none were bold enough to let me get up close until a curious one landed on the fence last week and wasn’t scared when I walked up to it. I noticed that it had one back wing that was slightly crumpled. It didn’t seem to affect its flight though. It sat on the fence and stared at me and even let me put my face right up to it, so I got a great look at its old man mouth and huge eyes. It didn’t fly off until after I was distracted by and returned to Gully.

See how the wing is bent?

Look at its little open mouth! 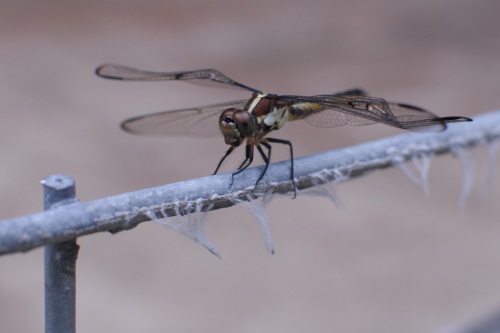 Yesterday, however, I made even more progress with the local dragonfly population! This particular one had a very bright green head and a blue body. It happily danced and flitted about, landing on the fence and flinging itself away again. I’d try to approach and off it would go, only to land a few feet away. I patiently danced with it until, at last, it stayed and peered at me. I slowly reached out my hand and got it close enough so that my extended index finger was right in front of its face. Expecting the big launch, I was super excited when it stayed instead. I moved my finger a tiny bit closer and the dragonfly reached its two front legs out and grasped the tip of my finger!  I stayed like that for a few seconds and then very cautiously, I gave it a tiny nudge. And if it hadn’t happened to me, I wouldn’t have believed it: it climbed up onto my finger!! I stood like that for as long as I could stand it and then slowly turned my finger around and brought my hand so that it was about a foot from my face. I stared into that dragonfly’s shiny reflective eyes (different than those of the ones on the one from the week before), perfectly content. I milked it for as long as possible and then the dragonfly resumed its flight. I went to get my camera in the hopes that I’d be able to capture it on my hand again but all I could get were a few shots from a few feet away.

At least you can see the special dragonfly that became my friend!

One response to “Dragonflies everywhere!!!”